My name is John DeRosa and I’m a consultant engineer for KHNS as DeRosa Consulting LLC. I’ve been an engineer of many flavors in my career, including a long stint as a software engineer. However, broadcast engineering over the last 5 years has brought me back to my roots.

KHNS is a public radio station that broadcasts 25 two-hour live DJ shows a week catering to various musical tastes, NPR and PRI content, independent productions, Alaska-specific content and local news. All our DJ shows are hosted by local, talented volunteers in both the main and remote studios.

Before we purchased Tieline Bridge-IT codecs around 2 years ago, we transported our audio from the remote studio in Skagway to the main studio in Haines via three transmitters, three receivers, and six antennas. The sound was poor and the maintenance was high, including yearly brush cutting. Replacing all that with the pair of Bridge-IT codecs gave us great sound and reduced maintenance, which is extremely important given that access to the remote studio is by plane, ferry or a 7 hour drive (on a good day).

When we first installed the Bridge-IT codecs, we were broadcasting about 5 two-hour shows a week from our remote studio. These shows were limited to office hours because a staff person had to be in the main studio control room in Haines to get the remote DJ on the air.

Subsequently, I came up with a system using the functionality of the Bridge-IT, our control board and other 3rd party hardware, to allow remote DJs in Skagway to get on the air without a staff member in the Haines studio. This provides the opportunity to expand our remote programming to include early morning, late night, and weekend shows.

To “fly solo” we’re using one codec relay at the remote studio and two codec relays at the main studio. From the DJ’s perspective,all they need to do is press the ‘dial’ button on the codec’s front panel to get connected. After the two codecs connect the announcer simply flips the “DJ Switch” to ‘on’ and they are on the air!

We’re using a standard DSL connection in our Skagway studio and encode using Tieline’s low latency MusicPLUS in mono at 96kbps and the sound quality is excellent. By connecting automatically to the main control room our remote DJ’s are available for more shows, the remote community is better served, and the workload is reduced in the main studio.

Our DJs are excited about the opportunity this provides to expand programming from the remote studio. In addition to music programs, this now allows us to add a local magazine program specific to Skagway, which will alternate with the Haines version. It also allows us tomove into morning news hosting from Skagway.

For more information about Bridge-IT and other Tieline codecs, visit http://www.tieline.com/products.

Before we purchased Tieline Bridge-IT codecs we transported our audio via three transmitters, three receivers, and six antennas. Replacing all that with the pair of Bridge-IT codecs gave us great sound and reduced maintenance, which is extremely important given that access to the remote studio is by plane, ferry or a 7 hour drive (on a good day).
John De Rosa
Consultant engineer for KHNS as DeRosa Consulting LLC
Share on facebook
Facebook
Share on twitter
Twitter
Share on linkedin
LinkedIn 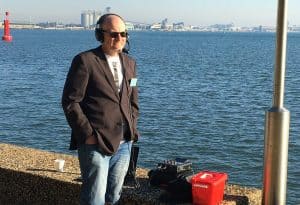 ACE Radio takes ViA Off the Beaten Track 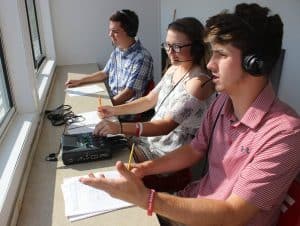 Tim Dench is the Station Manager and Radio and TV Instructor at Jeffersonville High School (JHS) in Clark County, situated at the

By submitting this form, you are consenting to receive marketing emails from: Tieline Research, 4 Bendsten Place, Balcatta, 6021, AU, http://www.tieline.com. You can revoke your consent to receive emails at any time by using the SafeUnsubscribe® link, found at the bottom of every email. Emails are serviced by Constant Contact.